After the portlights the build manual tells us to test fit the ventilators on the Dorade boxes.

The ventilators consist of three pieces - an outer flange with a female thread and an inner plate with a male thread to seal the opening, and a flexible and adjustable cowl to fit to the outer flange.

Here are the parts. 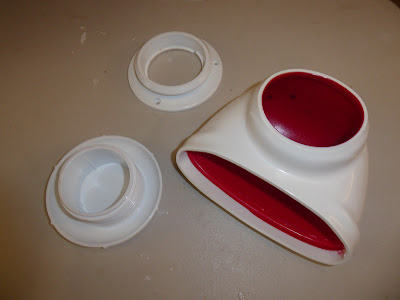 The outer flange is fastened to the cabin roof with three 4mm machine screws. The idea is that that the inside plate can be screwed in to seal the Dorade box, and screwed out to provide ventilation.

As with the portlights I made a test installation on a piece of scrap before cutting into the hull.

The diameter of the hole required is 70mm, so I cut such a hole in a piece of scrap, as here. 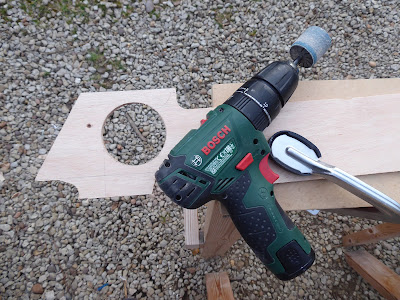 This was just right for a test fit of the inner and outer components, like this. 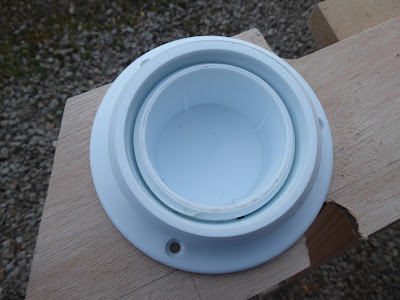 Next step was to decide where exactly to site the ventilators on the Dorade box roofs.

I covered the roof with masking tape and pencilled in a few different positions before deciding on the following. 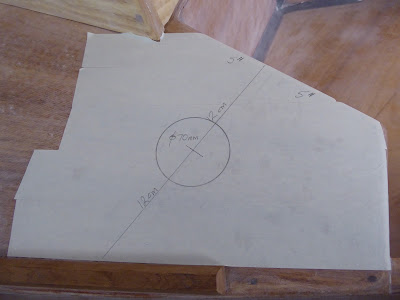 I marked in a line at right angles from the mid point of the inboard side face of the Dorade box, and bisected that line to obtain the centre of the opening for the ventilator.

It is not dead centre, and is set back a little from the middle of the box. It looks as if it was intended to be in that place and nowhere else, and looks good.

So that's where we will cut the hole!