Two posts back I snapped the final laminate on the starboard rub rail during installation, and set it aside while I decided what to do with it.

After some agonising I decided to cut a new scarf where the laminate had broken. That would mean that it had three scarf joints instead of the intended two, but I hoped that it would not be too obvious.

So I cut a new scarf joint and glued up the laminate. Here it is curing on top of a sawhorse. 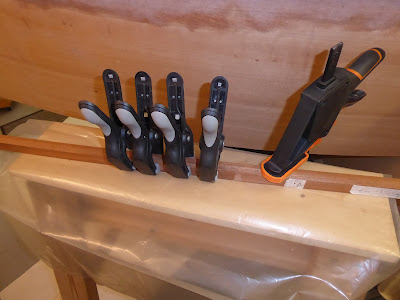 When cured and cleaned up I proceeded with installation.

And guess what? It snapped again.

I was too disgusted to take photos of yet another snapped piece of Sapele!

So I cut a new scarf joint where the broken piece is joined to the rest of the laminate, and glued it in place. Like this. 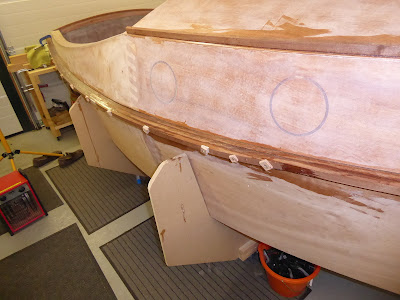 I will have to install the final piece with the scarf joint in situ. I've done it once already, so I know how to do it.

I ordered more wood. It was the middle of the Christmas holiday, so nothing would arrive until the first week of January.

Thankfully I could proceed with making the companionway.