I attempted to install the third and final laminate on the starboard rub rail shortly after Christmas, and of course it snapped.

It was entirely my fault - see previous posts if you're curious about the unhappy event.

In the end I removed the broken piece by cutting a new scarf where it was joined to the rest of the timber, and installed the shortened laminate.

More Sapele arrived early in January and was set aside while I continued work on the companionway.

Eventually, while waiting for things to cure, I resolved to tackle the remaining piece of rub rail.

I was very careful not to repeat previous mistakes, and the installation went smoothly.

Here is the newly fitted laminate, viewed from the side. 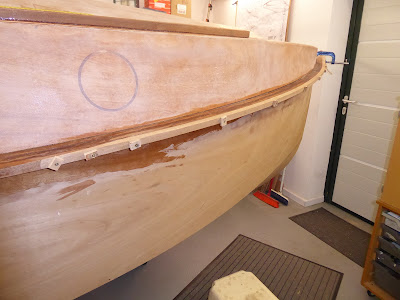 I drilled the new piece for temporary screws and made pilot holes in the rail at the scarf, and fastened the aft end in place.

More pilot holes were drilled as the timber was gradually bent into place, working towards the bow where a clamp on the overhanging rail completed the test installation.

The screws were then removed - carefully this time - and the new piece held loosely in place with F clamps while I applied glue to the rail.

The installation was then repeated successfully.

Here is the completed rub rail seen from the bow. 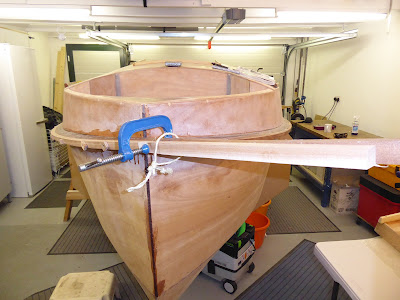 I am very happy to have installation of the rub rails behind me.

They have been the most vexatious part of the build by far, and they aren't even structural!

But they are looking nice ... which is their main purpose.