The upper breast hook needed some slight trimming to obtain a good fit, but it was pretty much good to go as it was.

When happy that it was ready to install I drilled screw holes in the sheerclamp, with a deep bored countersink so I could plug the holes later. This was not for aesthetic reasons, but because I thought I would need to round over the edge at some stage and did not want to hit a screw head with the router bit.

I used a router to bore the holes, with a drill and countersink bit to cut holes for plugs at the same time. Here is the bit. 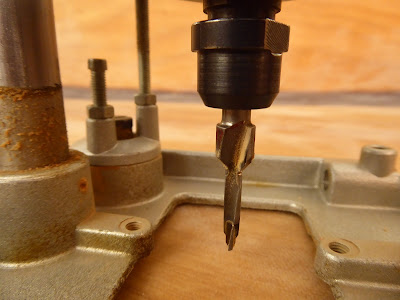 And here is one of the holes which it bored. 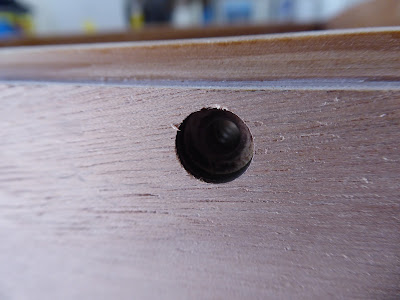 You can see how it has bored a deep countersink to accept a wooden plug.

Next I clamped the breast hook in place so I could mark where the pilot holes would be. Like this. 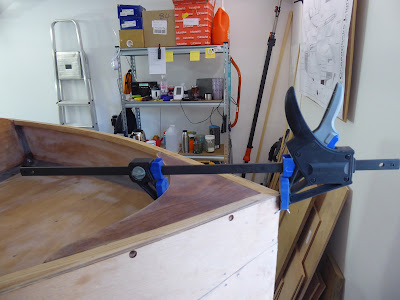 The breast hook must be very closely aligned to the sheerclamp, which means that the pilot holes for the screws must be very accurately marked and drilled.

Previous experience told me that using the bradawl would not be suitable. The slender point cannot be accurately centred in the screw holes.

Nor did I wish to place a screw in each hole and tap it with a hammer. This would dislodge the breasthook, even if only slightly, and the pilot holes would be in the wrong place.

I recalled that I had seen the solution to this problem on television some time ago, and Googled it to see if it was available. It was! It's called a Marxman and this is what it looks like. 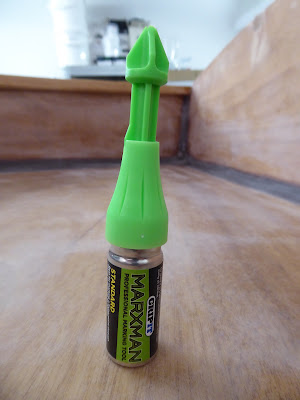 You put the nozzle in the hole, and lightly press the base. It squirts a dry jet of fluorescent pigment through the screw hole and onto the surface to be drilled, exactly marking it out!

A quick trip to the local hardware store, and problem solved.

Pilot holes were drilled and the breast hook was test fitted, as here. 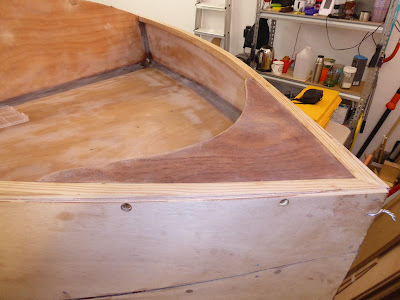 I have only one screwdriver which exactly fits the countersunk bronze wood screws which I am using. Here it is. 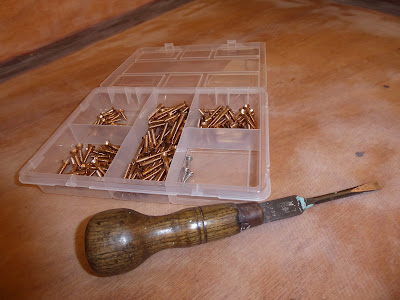 This tool once belonged to my grandfather. It is date stamped 1939, so it's been around a long while! It is also stamped with the 'broad arrow' mark of British ordnance, which means that it was Crown property and most likely used in military service. I always wonder about its history when I use it.

Happy with the fit I glued and screwed the upper breast hook in place and left it to cure, as here. 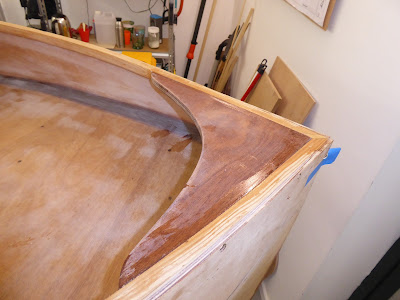