I made the toe rails that run along the edge of the cabin roof while I was covering the upper hull in fibreglass cloth. It was a welcome distraction and a good use of time while resin was curing.
The toe rails are made from Sapele hardwood, which will look nice when oiled or varnished. The stock supplied in the timber package was oversize so had to be reduced to the specified 3/4" square section.
I did this in the vice with a jigsaw, as here. 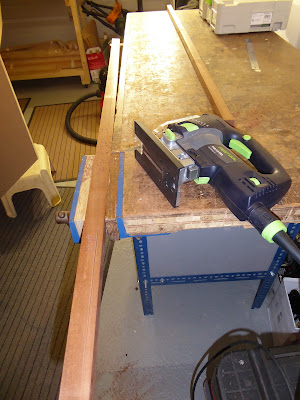 Then it was planed to a straight edge with the jack plane, and finished with the block plane. Like this. 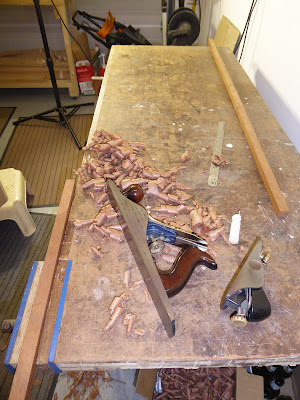 Next I drew a diagram of the required trapezoidal section for guidance, as in this pic. 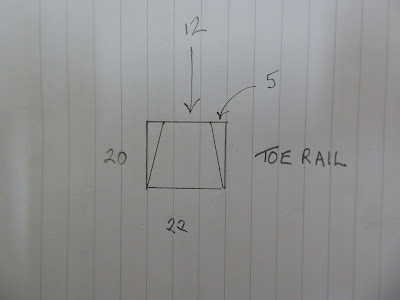 Then I marked up the rails accordingly, using my trusty old cutting gauge as illustrated here. 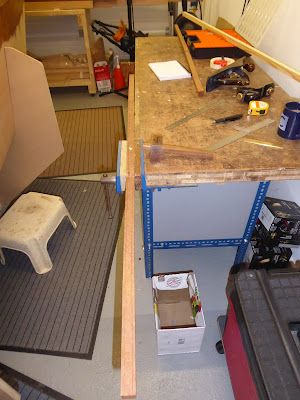 The cutting gauge is fitted with a small sharp blade rather than a pin, and is used to mark up long lengths of timber for ripping. Here it is in close up. 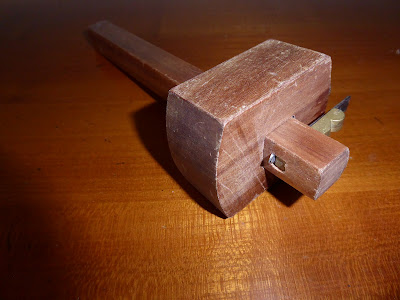 The blade cuts a fine line along the grain, as deep as you wish to make it. This is much more visible than a pencil line on the dark wood, and it is very easy to know when you have reached the line because it shows as a bright stripe along the edge of the workpiece when you hit it with the plane blade. That's enough about the cutting gauge ...
It was clear from the diagram that the rails would be difficult to shape. As usual the manual tells us to use the tilting table saw which we do not possess, so the rails would have to be planed to shape.
There was no way to hold the rails down on the bench or in the vice to allow them to be planed, so I fastened them to a length of scrap.
By clamping the ends of the scrap piece to the bench it was possible to hold the rails rigid and plane them to the required section, as in this pic. 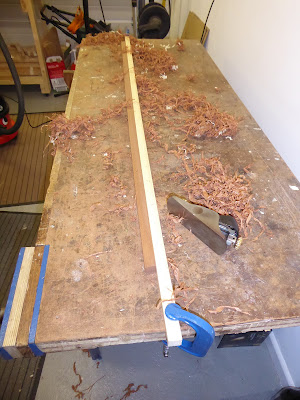 It took a lot longer to do than just running the rails through a table or band saw, but it worked out just fine.
This is the resulting trapezoidal profile. 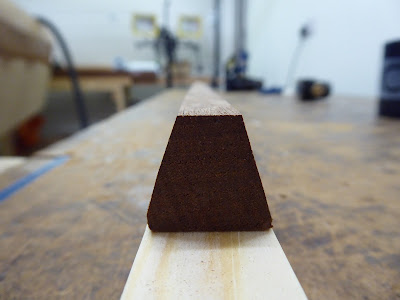 Next was to decide how best to bend the rails into place for a test fit. Now that they were reduced in mass by sizing and shaping they felt quite pliable.
I marked out the curve of the cabin roof edge on a board and made a test bend of a rail, clamping it in place. This is it. 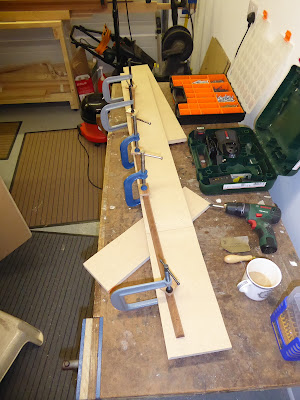 That was quite easily achieved, so I then drilled holes in the rails for temporary screws to fasten them to the cabin roof. As here. 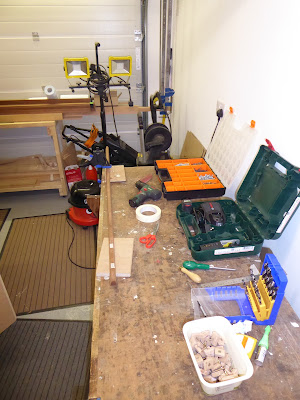 The manual shows that the builder used seven temporary screws in his rails, but I felt that the curve at the forward end was a bit too stiff and needed another screw in the Dorade box area.
Here is the starboard toe rail test fitted to the roof. 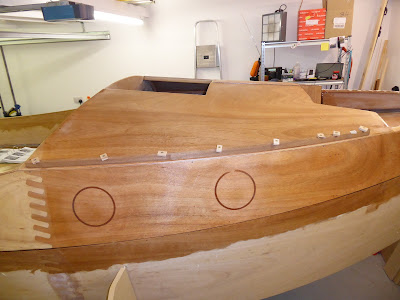 And here is the front end of the rail, showing the three screws holding it in place on top of the Dorade box. 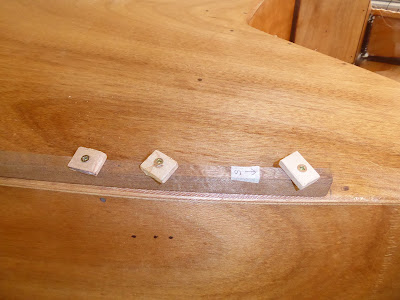 I wondered about where exactly to site the rails, in relation to the edge of the roof.
In the end I installed them right on the edge because this allows the temporary screws to be driven into the sheerclamp as well as the deck, providing good holding.
The manual states that the rails will be 48" long when fitted and finished, so I will have to trim an inch or two off the front end when installing them. That can wait.
The rails were finally set aside to await installation when the cabin roof has received its requisite three coats of epoxy resin.
at November 08, 2020