The day finally came when my next activity was making and fitting the rub rails which run along the sides of the boat.

Like the toe rails, I started this while covering the upper hull with fibreglass, and waiting for resin to cure.

I broke out the lengths of Sapele hardwood supplied for the rails.

Each rail is made from three laminates, fastened one at a time to the full length of the hull. And each laminate consists of three pieces of Sapele, scarfed together to make a single length.

Scarf joints are made on a 10 to 1 basis for the length of the scarf and the thickness of the wood respectively. I hope that makes sense.

Our Sapele is 20mm thick, so each scarf will be 20cm long. Simple.

It is essential that that the scarfs are accurately made, so it takes a lot of time to mark them up and cut them out.

Here I am marking out the length of the scarf, using a metric steel rule and an engineer's square to make sure that the joint is exactly 20cm long and square. 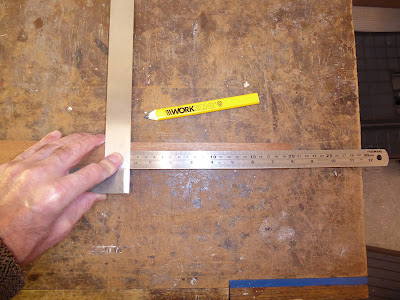 Next the joints are marked out using a steel rule and a marking knife, like this. 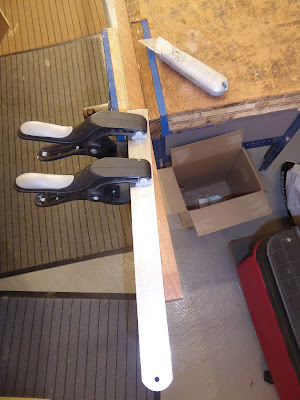 The steel rule is held firmly in place with a couple of spring clamps, which allow it to be positioned very accurately. You can't hold it in place by hand - it doesn't work.

Then the joint is firmly but carefully marked up with the knife. I have got a fancy Japanese marking knife but I found in practice that a craft knife with a new blade was easier to use and very effective.

The rule needs to be as heavy and stiff as possible, which is why I like the rule in the above pic. I stole it from the metalwork shop when I was at school - it's so old it predates the metrification of the UK, and is only marked in inches. I love it!

It's important to use a knife rather than a pencil, for the reasons given in the previous post. A pencil line is not visible on the dark wood. The knife cuts a deep line which is easy to see and shows as a bright stripe when the plane blade reaches it.

I devised a method for labelling each piece so I would know which laminate it belongs to, and which of the three constituent pieces it is. 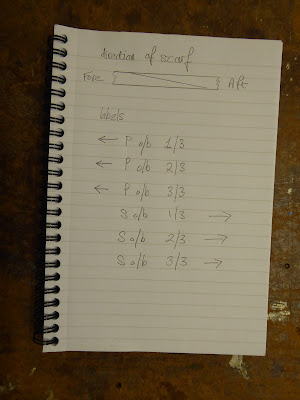 All the scarfs must slope in the same direction, fore and aft, for looks. And the pieces must be numbered and labelled Port and Starboard, pointing forwards.

This will avoid much confusion later, with 18 pieces of wood to handle.

The pieces were bundled together to await the cutting of joints, with one bundle for each laminate. 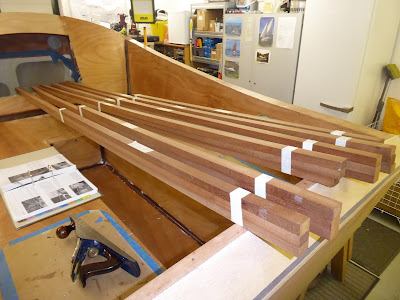 I planed the first four joints before deciding that there must be a faster way of doing this.

So I fitted a rip cut blade to the Japanese saw and used it to remove nearly all the waste, like this. 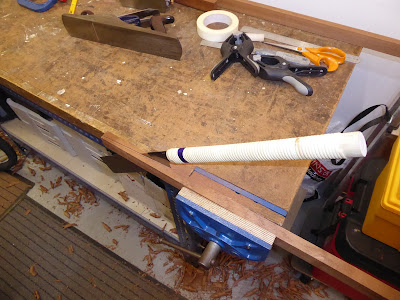 This is very quick and achieves a clean and accurate cut. As seen in this pic. 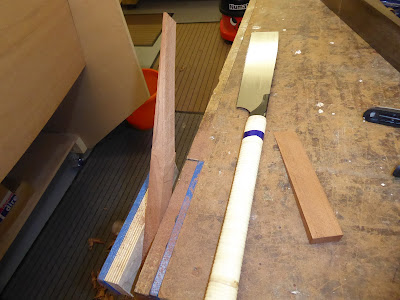 The scarf is then clamped in the vice and planed down to the line with a jack plane, as here. 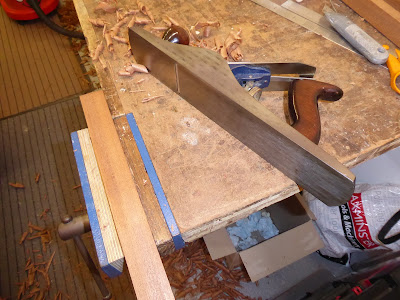 Finally, the scarf is moved to the other end of the bench and clamped in place to be finished with the block plane. Like this. 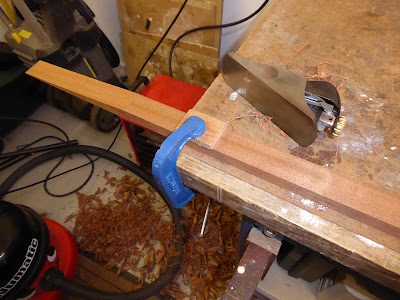 Here are the scarfs all cut and ready for gluing, stored in bundles for each laminate. 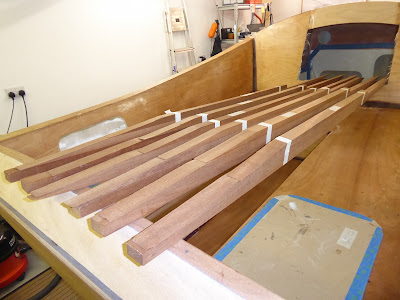 That was a lot of fun!