As mentioned in the previous post, each rub rail is built up from three laminates, and each laminate consists of three lengths of Sapele - two long and one short.
Now, the build manual suggests that the laminates are made by gluing the three separate pieces directly to the hull, rather than making a single full length laminate which is then fitted to the boat in one piece.
I didn't like the sound of that. It is vital that the rub rails have a perfectly fair curve, and that would be most easily achieved by fitting a single full length which would naturally form its own pure curve.
I also thought that a single long piece would be easier to bend than three shorter ones.
So I decided to make the laminates first.
I began by gluing one short and one long piece together for all six laminates.
First I made a test fit in the workshop. Here is what it looked like. 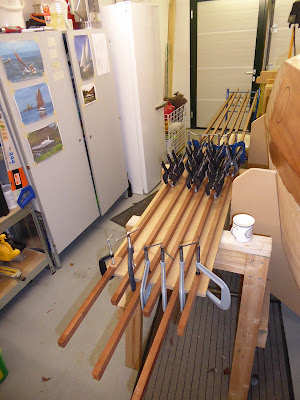 Each scarf was clamped with three spring clamps, which did the job nicely.
You can also just see that I clamped each length of Sapele in place with G clamps i.e. the short as well as the long pieces. As I did this I realised that some of the pieces were not perfectly true, and had a very slight twist to them. Clamping these pieces down was pulling the scarf joints out of true, so that was not a good idea.
Always best to do a test fit, even when it doesn't seem totally necessary ...
I also said in the previous post that I labelled each piece, to avoid any confusion when gluing up the laminates. This proved very useful. Here is such a label. 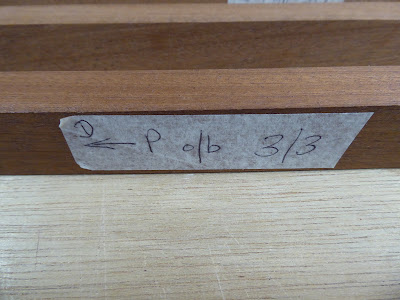 When satisfied that the scarfs were tight and true I glued them together, as here. 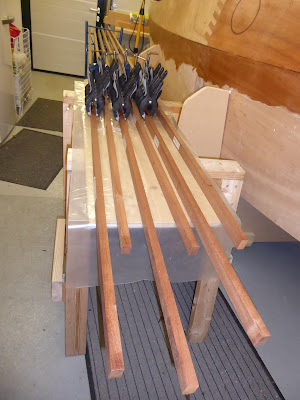 Just one length is clamped down for each joint, allowing the spring clamps to pull the scarf together.
That went well. The joints looked good when glued up. Like this. 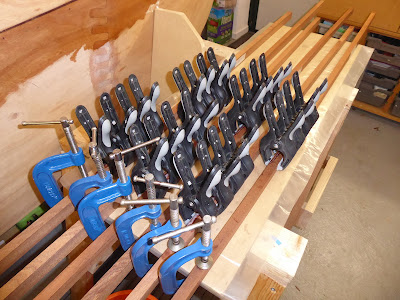 While doing all this it became very obvious that there was not enough room in the workshop to glue up the third piece, to make the full length laminate. So that would have to take place inside the house.
Once again a test fit was carried out. It turned out that there was only one place where the laminates could be made and then successfully removed from the house, and that required the use of two rooms. This is how the test fit looked. 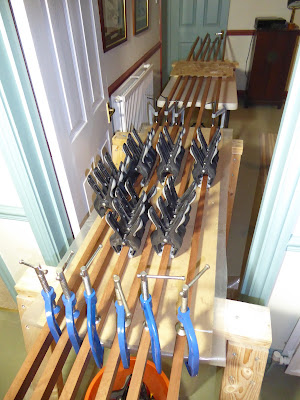 This time I found that it helped to clamp the straightest pieces on both sides of the scarf, to steady the now very long lengths of wood and stop them wobbling.
Again, when happy that everything fitted properly I glued the joints - taking great care not to drip epoxy on carpets and furnishings in the process. Here is what it looked like. 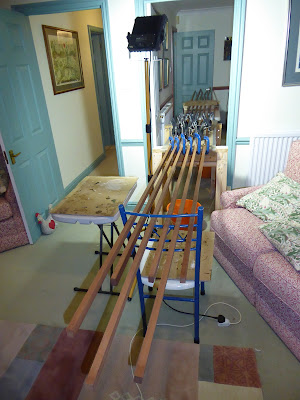 Here is a closer view of the joints themselves. 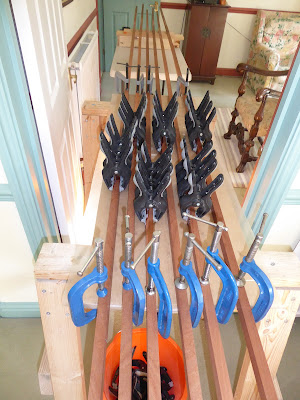 I left the laminates to cure for several days, to be sure that they would be strong enough to move back into the workshop for fitting.
We're getting there!
at November 21, 2020