While the first laminate on the port side was curing I prepared the second layer for installation. This required the second and final scarf joint to be cleaned up, after curing inside the house.
This was quickly achieved with a Shinto rasp and the block plane, as here. 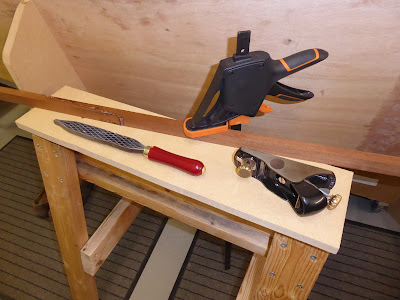 The finished scarf looked quite nice. Maybe not quite as tight as I would have liked, but certainly good enough. Like this. 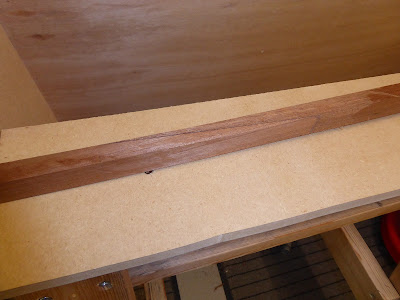 We must remember. It's a boat. Not a piano.
The next task was to mark up the laminate for its temporary screws.
I did this by offering up the laminate to the boat and putting a piece of tape where the screws are required, being careful to avoid the holes which would be left by the temporary screws in the first laminate.
I then copied the mark up to its starboard counterpart, so I didn't have to do it twice for the other side of the boat.
Like this. 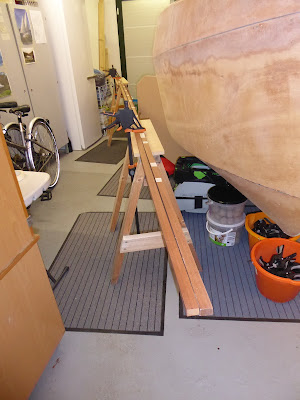 Time to remove the temporary screws from the port laminate.
I now always use the heat gun to release screws from any epoxy that may have welded them in place, having snapped the head off several earlier in the build. As here. 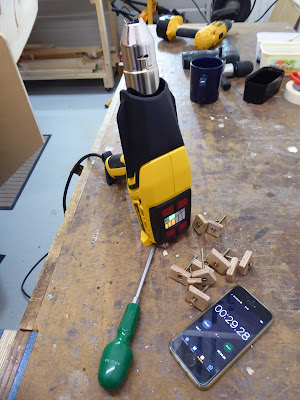 Broken screws are a real pain to extract, which is why I now also use a screwdriver rather than a drill driver to do this. The torque from a drill driver will snap a screw without warning, whereas with a screwdriver you can feel how stiff it is. Thirty seconds at 250 degrees C is enough to free the screws.
Next came the test fit for the second laminate. This is it, seen at the bow. 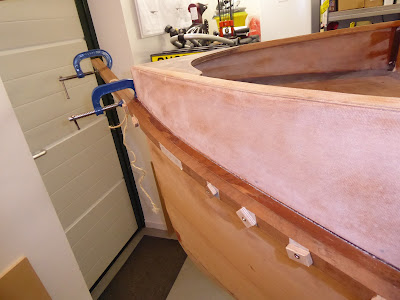 And here is the rear half, in place. 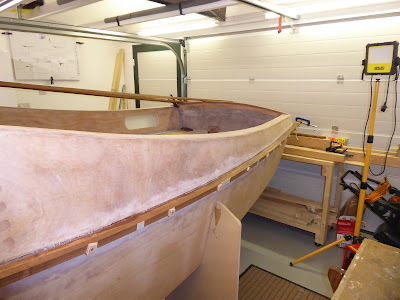 The fit was excellent, with no gaps.
The overhangs at the bow and stern are great for clamping the ends tightly in place.
So I got ready to glue it up.
Part of the drama when installing the first laminate was caused by 'losing' the pilot holes for the temporary screws in the epoxy, so I used bits of wire to avoid that happening again. Like this. 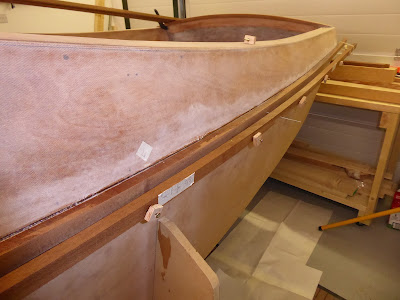 I used a loop of string at each end to hold the piece loosely in place while I applied the glue and tightened the screws, as in this pic. 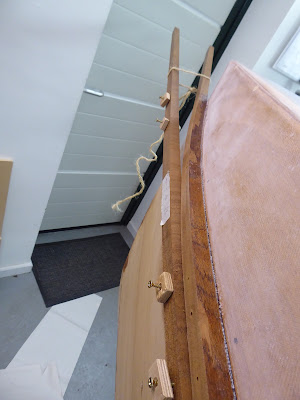 As with the first laminate I worked from the centre outwards to the stern and bow, in that order.
It went well. Here is the second port laminate glued in place. 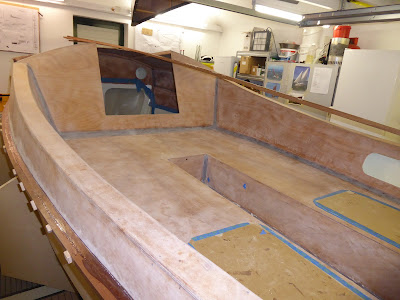