When the completed port rub rail had fully cured I removed the temporary screws and trimmed the overhang at the bow to allow the starboard rail to be installed. As here. 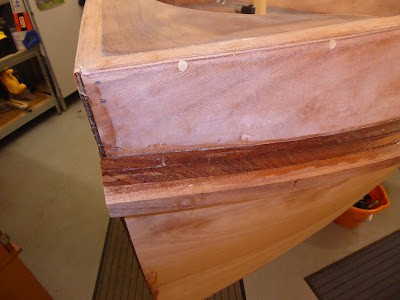 I decided to proceed with the installation of the first laminate of the starboard rail without another test installation.

This was partly because it had already been done once, but mainly because I didn't want to place unnecessary strain on the pilot holes in the hull for the temporary screws.

In hindsight I am not sure if this was a good or a bad decision, because things certainly did go wrong.

As usual I started by applying glue to the laminate and fixing it in place amidships and then worked aft to the stern. It looked like this. 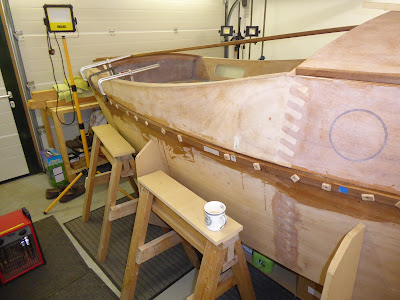 I then started to screw down the laminate at the forward end, working towards the bow.

Exactly as I did in the test fit, which went without drama. Not this time, however.

The forwardmost eighteen inches really did not want to lie down next to the hull, and after fighting back for a couple of minutes it simply snapped with a dull crack.

There was no angry outburst. The air did not turn blue. There was merely a loud metaphorical splash as my heart sank, taking my spirit with it.

I had no choice about what to do. Most of the laminate was securely in place, and there was no way I was going to attempt to remove it to make a new one.

So I cut away the broken piece just before the fracture, leaving a butt end while I decided what to do. Here is what it looked like. 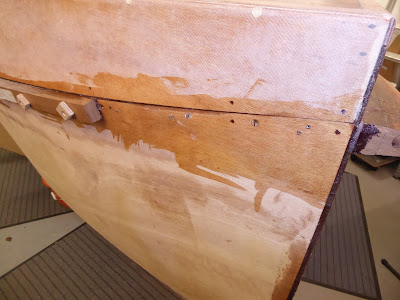 And this is the fracture itself. 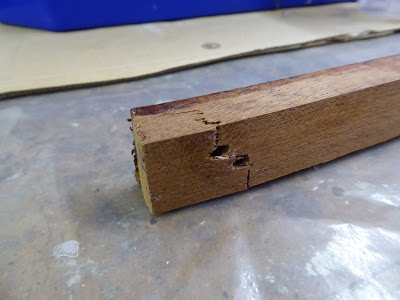 Ouch.
It seemed like the only thing to do was to scarf the broken piece onto the boat, so I retired for the night to allow the laminate to cure.

The next day I cleaned up the piece which had broken off and cut a nice scarf on the end. Luckily it was long enough to still have a decent overhang at the bow, for leverage when fitting.

Cutting a scarf in situ on the boat might be tricky, but I cleaned up the hull and marked up the joint.

Then I fitted a rip cut blade to the Japanese saw and carefully removed most of the waste. Like this. 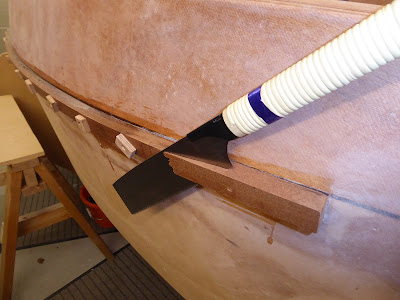 That went well. Then I finished the scarf with the block plane to obtain a good fit.

This is the finished scarf on the laminate. 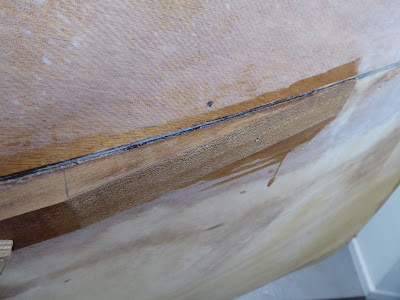 I drilled plenty of holes for temporary screws, most of which would be driven into the lower breasthook with plenty of grip.

I made a test fit which did not provide too much trouble, and glued the refinished piece in place.

Here is the completed installation. 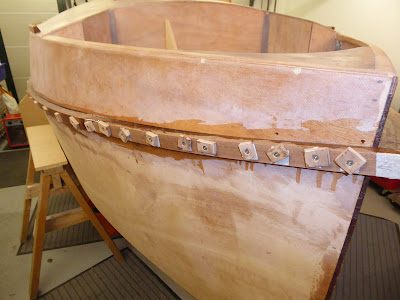 All is well that ends well, and definitely time for a Gin and Tonic to end the day. 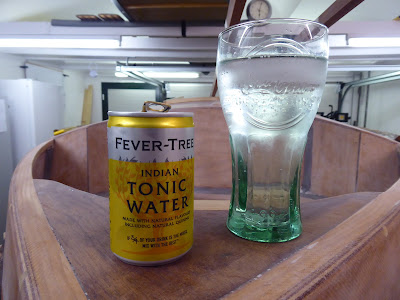