Emboldened by the successful installation of the first two laminates on the port side, I marked up both port and starboard third laminates and drilled the port piece for temporary screws.

As before I offered the third layer up to the port rail, holding it in place with a loop of string over the overhangs at each end.

It bent quite easily into place and I was just about to clamp the ends when ... BANG!

In the blink of an eye the third layer shattered and fell to the floor in three pieces.

Here are the pieces on the bench. 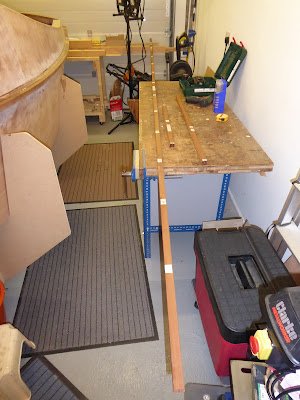 I think what happened was that the laminate slipped off the top of the rail on the boat but because it was tethered at both ends by the loops of string it effectively twisted itself and snapped.

It fractured in two places - each where a hole for a temporary screw had been drilled, making it a weak spot. 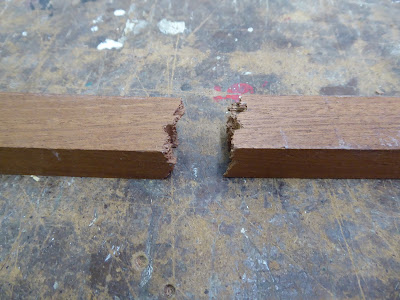 Needless to say I was not very happy about this outcome.

I thought for a short while about scarfing the pieces together again, to make a new length.

But that would mean that the third laminate would contain four scarf joints and would at best look a bit odd.

As if it were made from bits of scrap timber, which of course it would be!

It would be easier and less work to simply obtain a new length of Sapele and remake the rail.

So that's what I decided to do.

It was Friday evening, of course, meaning that I would not be able to order the timber until Monday and it would be mid week at the earliest before it would arrive.

Time to move on to something else!