With all work on the rub rails suspended until I could remake the third port laminate I decided to start work on the companionway.
This looked like a large and interesting project in itself, and was not dependent on anything else so could be carried out in parallel to the rub rails.
This is unusual with PocketShip. Most things are on a critical path, so it would be good to take advantage of the situation.
The first step is making the companionway sill, which surrounds the top opening of the hatchway
It consists of just three pieces of Ash - the front and two sides.
The front piece is shaped to fit the transverse curve of the cabin roof, and is marked out with a pattern.
Just one full size pattern is provided - for the front face of the companionway hood - but the curve is the same on all the other transverse components of the companionway so this pattern is all we need.
Here I am marking up the forward piece of the sill, using the pattern. 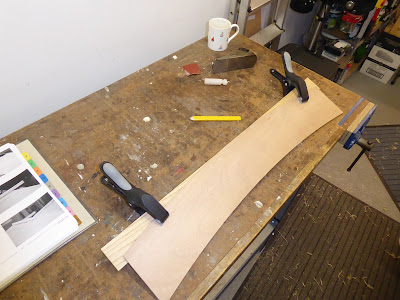 The piece of Ash provided for this part is only just wide enough to make it the correct height. Ideally it could be an inch wider to be sure of not making a mistake and wasting the wood.
Anyway, I cut it out and trimmed it to size with the block plane. It was fine.
Next came the side pieces. They require a bevel of 78 degrees for them to sit vertically on the cabin roof.
I had issues measuring angles for bevels earlier in the build and realised that I needed some sort of small protractor - especially for the companionway.
So I was delighted when I recently found this little steel protractor at the DIY store. 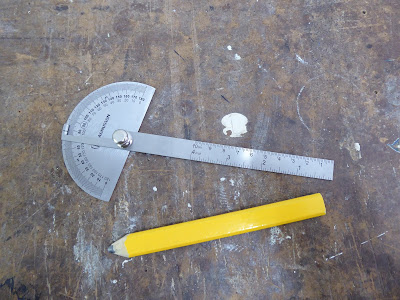 It is fitted with a pivoting and locking rule so it is excellent for marking and measuring  angles, such as for small bevels.
The bevels were marked on the top and bottom of each side piece and planed to shape in the vice.
Next I made a test fit of the sill, as in this pic. 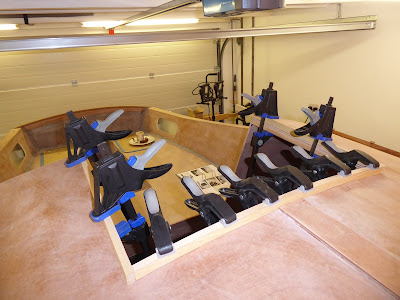 Looking good! The butt strap which joins the two halves of the cabin roof stops half an inch short of the companionway, which accommodates the front of the sill perfectly.
However, as I was fitting the sill I realised that the same was not true of the front end of the butt strap which ran all the way to the forward cabin wall.
The front face of the companionway hood lands there, and the strap was surely in the way?
Sure enough, a rapid consultation of the build manual showed that the strap should stop 2 1/2" short of the front.
I'm not sure how I overlooked this because it is crystal clear in the instructions!
So I marked where the strap should end (below) and prepared to cut away the excess very soon! 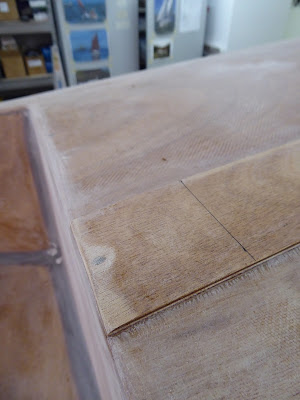