I stated in a previous post that I was not entirely happy with the blue hull side panels. There was a 3" wide strip of dull paint all along the panel, next to the white stripe.

It isn't clear to me how it happened, but this was the strip not masked off and covered to protect the sides from the mess entailed in wet sanding. I must have spoiled the surface somehow when finishing the white stripe.

There were also a few light patches where there was insufficient depth of paint, despite the six coats of gloss that had been applied.

I decided to just leave it for a while, to see if I could live with it. As I suspected, I couldn't.

Five more coats of gloss were then applied to obtain a good depth of colour with no dull or light patches. 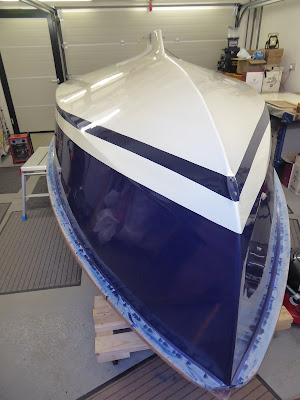 It was a massive amount of work but I was now sure that the sides would stand close scrutiny. The depth of colour is good and the surface is like glass. Very nice.

But I wouldn't care to do it again!

It was now time to start on the transom. I am copying the paint scheme on the prototype PocketShip, so there will a boot top stripe across the transom and a frame up the sides. The transom itself will be finished bright with varnish.

I started by masking off the transom and painting the blue stripe, as here. 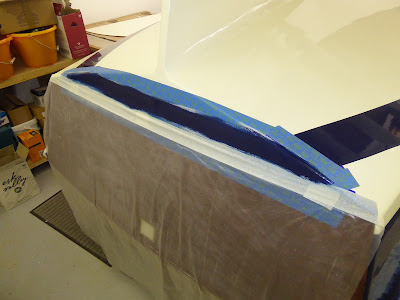 This is going to take a long time!