I decided at the start of the build that I wanted PocketShip to have a handsome boot top stripe, like the prototype.
It's a lot of trouble to do properly and some builders don't bother, but I thought it was worth the effort.
The first step was to determine how wide the white stripe on the blue side panels should be, and how far down the sides it should be located.
After consulting lots of of photos I concluded that the stripe should be about 38mm from the edge of the white bottom section at midships.
I used the laser level to mark up the top edge of the stripe, and then adjusted the bottom edge until it landed fairly at the stem and stern as shown in various builders' pics.
This is what the white stripe looked like when pencilled in half way along the hull. 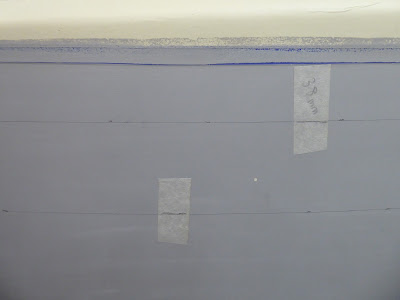 Here is what it looked like at the stem. 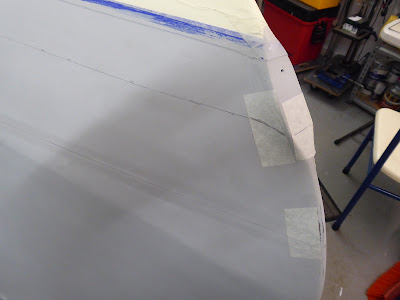 And this is what it looked like where it crossed the chine and ran along the bottom panels to the transom. 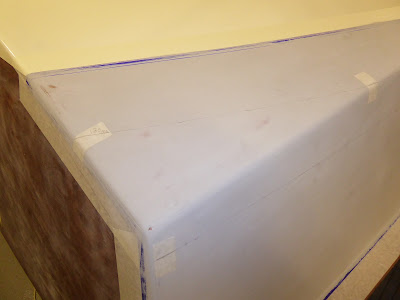 I adjusted the edges fractionally at the bow and stern to make sure they landed in exactly the same place on both sides of the hull.
Lastly I used the laser level to ensure that all was level and straight across the transom, like this. 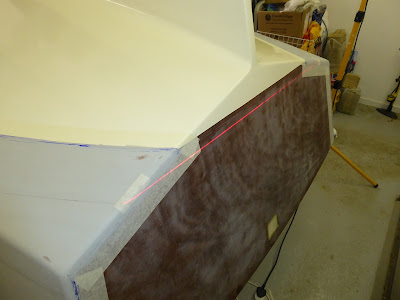 Notice how the stripe varies in width depending on the angle of the side or bottom panel, being exactly level itself from stem to stern.
I think that will look really nice. I'm happy with that!
at March 06, 2022