With the waterline now correctly in place it was time to apply paint. This was truly a momentous step in progress!

The primer undercoat for the bottom is white, and that would be the first paint to be applied.

A previously opened can was reopened and was found to have gone off, so a litre of expensive paint went to waste.

A second can was opened and the first coat was applied to the hull bottom, centreboard, drop boards and rudder. 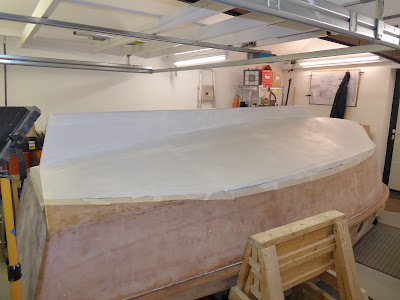 It was pretty patchy, unsurprisingly.

A second and a third coat were applied which covered really well but there were still very  visible brush marks after the third coat.

There should not have been any because I was using the recommended technique of 'rolling and tipping' which entails applying paint with a roller and then tipping it out with a quality paintbrush to remove the air bubbles and brush strokes.

There were no air bubbles but the finish was not good enough for a top coat.

So I looked at a few 'how to paint primer' videos on the internet and realised that that I had done two things wrong.

I had not thinned the primer to allow it to flow freely, and I been applying paint from the wet edge outwards instead of in the other direction.

Thus the paint was too thick and the brush dragged on the wet edge.

So.. back to square one. I would clearly need to repaint the bottom of the hull.

I wasn't too disheartened because I treated this as a learning exercise on a part of the boat which no one would see, so it was OK to mess up.

Accordingly I sanded the bottom panels to beautifully smooth P120 finish. They looked like this. 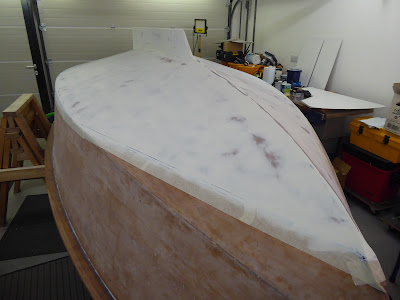 It was as expected very patchy and would need to be repainted.

I had run out of white primer, having used two litres to get thus far.

This was a Friday evening of course and it would be the middle of next week before more paint would arrive, so things are at a temporary impasse. 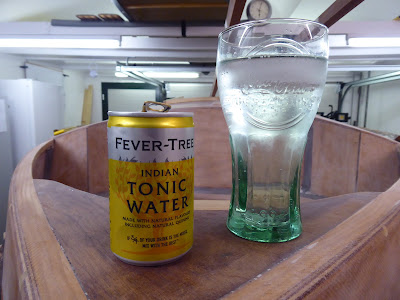