Transom | Taping Up For Paint

We would very soon be painting the upper hull with white primer, so the top of the varnished transom needed to be masked off.

While I was at it I decided to mark up and tape in the upper blue line of the transom frame to save time and trouble later.

First I decided where the white-painted transom skirt would meet the transom itself, and taped up a fair curve across the top of the transom. This masks the transom from the white paint.

Then I marked up and taped off the bottom edge of the blue frame stripe that will run across the tope of the transom. Like this. 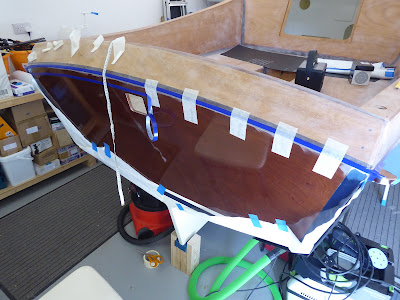 I used paper masking tape and a dressmaker's tape measure to ensure that the blue stripe would be the same width as the sides of the frame across the width of the curved transom top i.e. 38mm.

The top corners of the frame are curved where the top meets the sides so I very lightly scribed in a line using a suitably sized pot to make the curve, and taped off the corners.

Here is the port corner. 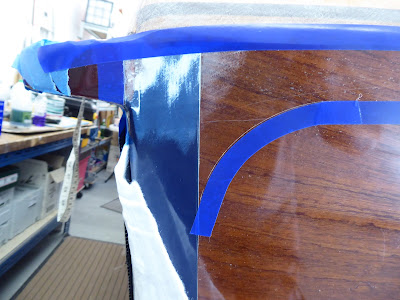 Here is the strip all taped up. 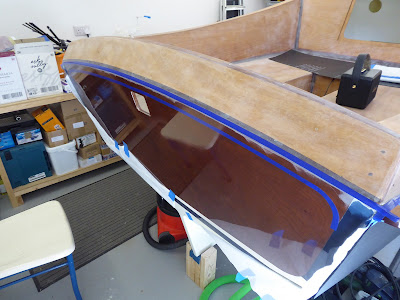 It was a bit fiddly and time consuming but will save a lot of trouble alter.

Lastly the transom was covered up with protective sheeting again.