I neglected to drill the drain holes in the cockpit footwell when the boat was initially upright, and had been telling myself that I 'forgot' to do it.

The truth is, I am sure, that I was terrified of wrecking the finished surface of the beautifully varnished transom by tearing out wood around the holes. Other have done this, and have had to paint the transom as a result.

But I could procrastinate no longer. Drain holes were needed before the upper hull could be painted, and had to be made now.

I thought about it for days and decided to drill a small hole from inside the footwell to mark the centre of the drains, and use that as a pilot hole to guide a bigger drill from the the outside.

In this way I hoped to avoid tearing the grain in the lovely Sapele transom by drilling in rather than out through the surface veneer.

Here I have used masking tape to mark where the centre of the drains should be inside the well, and drilled a 3mm pilot hole. 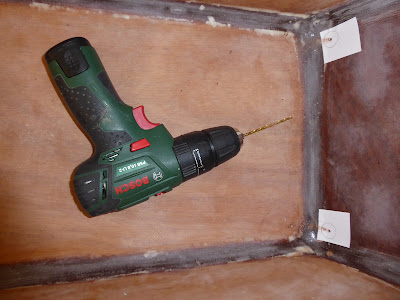 Here are both holes on the outside of the transom. 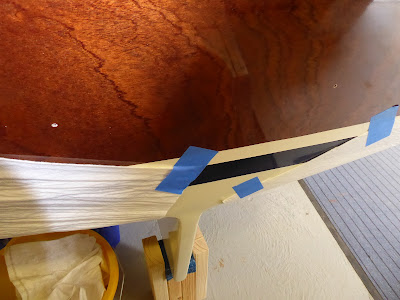 A quick check with a spirit level showed that they were exactly aligned. Phew!

Now came the thorny problem of how to drill the drains without ripping out lumps of ply.

I had previously obtained a 20mm needle point wood twist drill and tried it out on a piece of 18mm scrap plywood.

It was a failure. It drilled the hole just fine, but despite slow speed and great care I still tore up the veneer on the surface around the hole. So that was not going to work.

I visited my local hardware store which caters for trade - not DIY - customers, seeking inspiration.

And it was here that I found just what I needed - an auger bit!

The largest they had in stock was 18mm, which was just fine.

Here is the bit in my ancient brace. 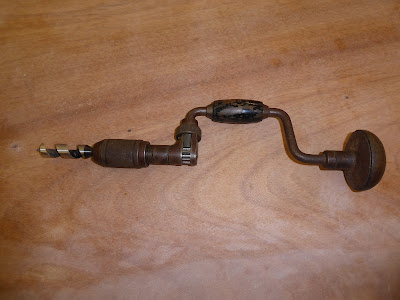 And here is the business end of the auger. 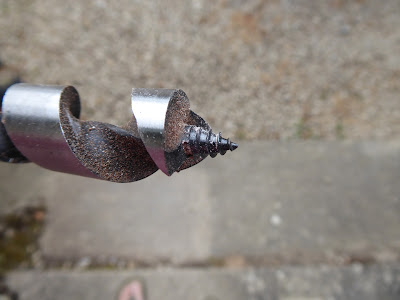 It has a screw tip which pulls the auger into the wood, and the super-sharp 'wing blades' of the auger cut the hole.

I tried it on some scrap ply and it worked well, so I took a deep breath and started to slowly and carefully drill the first hole in the transom.

It worked really well! The wing blades cut cleanly and effortlessly through the transom with no damage to the surface. 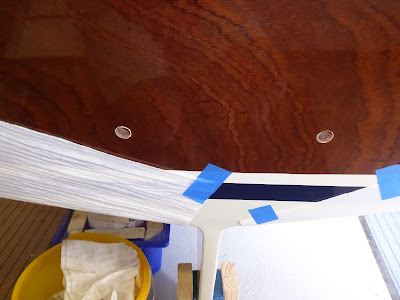