The mast, bowsprit and boom gallows eventually received seven coats of varnish and were stored away to provide room for the rest of the spars and components to be varnished.

The tiller and drop board retainers had been sanded back to bare wood following their initial and unsuccessful varnishing. They then got eight coats applied by roller and tipped out with a foam brush. They turned out nice.

Here are all the parts after the final coat of varnish. 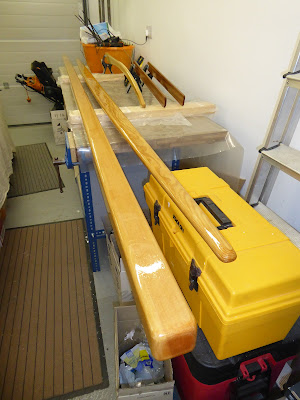 I was able varnish all sides of the tiller and drop board retainers at once by holding them upright with spring clamps.

Once the varnish had hardened I moved everything into the house, out of harm's way.