I left the mast to cure for a couple of days and then sanded off the squeezed out epoxy resin, leaving nice clean joints.

The following day I was dismayed to find that sticky glue had oozed out of the whole length of one seam on the forward face of the mast, meaning obviously that it had not cured - and never would. 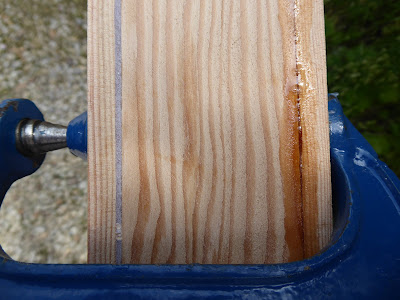 You can see that the seam on the left has fully cured, whereas that on the right is still soft and sticky.

This was a real problem. It was not as if the mast is a small or simple component which could be easily remade. Many hours and a lot of wood had gone into building it.

Clearly I had done something wrong when mixing the resin and gluing up the front stave.

Then I remembered that towards the end of the gluing session my resin suddenly became very thick and gloopy, and refused to pump easily. I switched the pump to a new container of resin which improved but did not eliminate the problem. The uncured glue must be connected to that.

I asked the supplier what had gone wrong and they explained that the resin will sometimes crystallise if the ambient temperature varies a lot. If crystallised resin had been used it would not cure properly.

So that was it. Something similar had happened when I glued the companionway sill in place and I had also been mystified then.

So I now had to decide what to do. Definitely a complete Cock Up!