Clearly there were only two options available to fix the problem of an uncured seam in the mast - replace the front stave or build a new mast.

I seriously considered the latter but decided that too much work and wood had gone into the mast to merely scrap it, and in any case it was 75% sound.
So I decided to replace the front stave, and purchased enough Douglas Fir to make a new one.
The other staves were made by joining two or three pieces of wood with scarf joints to make 16' lengths.
These scarfs came pre cut, which was great but I noted at the time that the scarfs were cut edge-to-edge rather than-face-to face.
A scarf joint needs to be 10 times longer than the thickness of the timber, so edge-to-edge joins on 3" x 3/4" boards are over 30" long as to opposed to 7 1/2" for a face-to-face join.
I therefore expected the new timber to be cut for edge-to-edge scarfs, but it wasn't.
When it arrived I measured the two pieces and there was enough to make a 16' stave using a face-to-face scarf, so that's what I did.
Here I am marking up the scarf on the first piece. 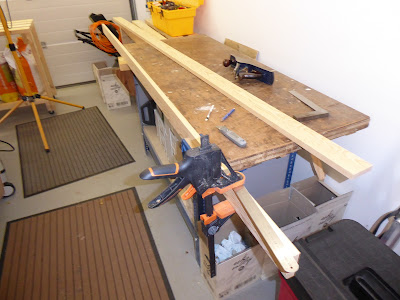 A stiff steel rule clamped firmly in place and a marking knife make this easy.
The scarfs were cut with the jack plane and test fitted, as here. 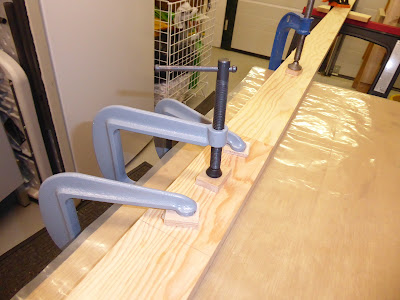 It looked good so I went ahead and glued the joint, like this. 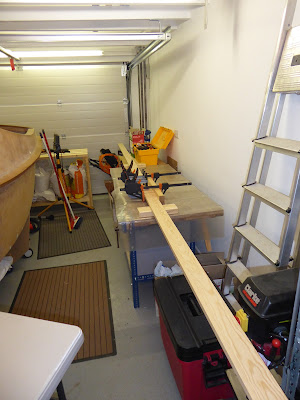 I clamped the join to a piece of straight timber to make sure that the two halves of the stave were aligned, as here. 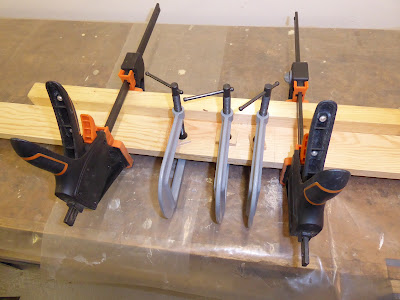 The the joint was left to cure while I tackled the old front piece in the mast.
at July 02, 2021