It was clear that gluing the mast together would be a big and time consuming task.

I did consider gluing the back piece to the sides first and adding the front piece later, but I thought the chances of the front piece fitting neatly into place were slim at best.

So it would be an 'all or nothing' approach, and I had better be fully prepared.

The test assembly showed as expected that I did not have anywhere near enough G cramps, so I purchased another 32. That's a strange number but the tool store offered 20% discount for batches of 16, so I got two lots. One lot would not be enough.

With the cramps taken care of I needed a long, flat surface to work on. The builder in the manual used folding tables for the task, so I did the same. My wife has purloined several of the tables which I already had, so I bought three more.

Here we are set up for gluing, with the mast supported on blocks and plenty of clamps in place for rapid deployment. 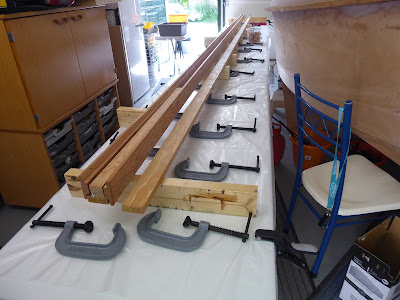 The bottom plug moved a little during the test assembly and I was afraid it might get pushed inside the mast when glued, so I screwed an eye into its end so I could pull or push it into place. 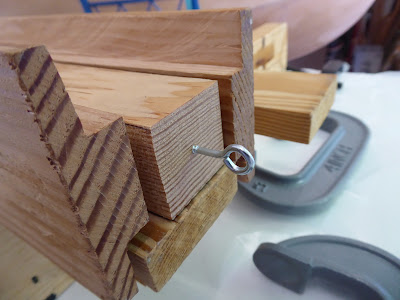 The actual gluing up session was somewhat fraught.
An awful lot of glue is required to coat the inside of the rebates and I found myself making new batches as I kept running out.
Also, foolishly, I glued up the top rebate on one side first so by the time I finished gluing the two bottom rebates it was starting to go off. I should have done the bottom rebates first and then the top ones at my leisure.
Anyway, we got there in the end despite the drama.
Here is the mast, glued up and curing. 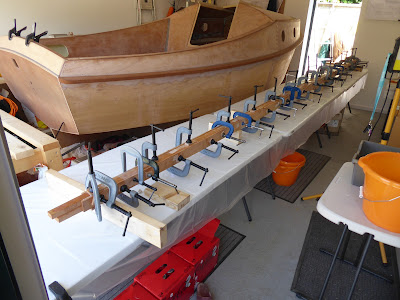 I used 43 G cramps in total. If I had known it would require that many to make the mast I would have purchased them at the start of the build. They would have been useful.
So now I will leave the mast to fully cure before finishing it.
at June 09, 2021