This exercise is to create the backbone of the boat, by joining the centre board case to the sides of the keel to form a strong and rigid monocoque casing. I thought it might be tricky, and it was!

I had read one builder's blog where his keel turned out curved. He had to cut it apart down the centreline to realign it. I certainly didn't want that to happen.

I asked for advice on the online PocketShip forum, and as expected I learned that builders use a string stretched between the ends of the keel to make sure that it is true i.e. if everything is straight and true the string will be exactly over the centreline along the entire length of the keel.

This photo shows the dry test assembly of the port keel side and the centre board case. You can see the piece of string stretched between two pins in the centre of the frontmost and rearmost keel blocks. 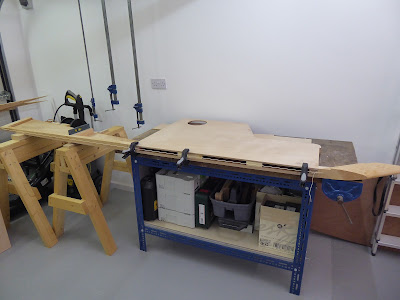 If the keel is true, the string will exactly bisect the centre board slot and follow the centreline along the length of the keel. Like this, taken during the dry test assembly. 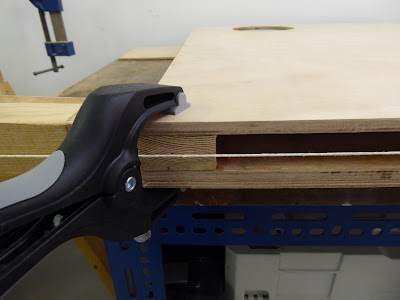 When satisfied that everything was true I started to glue the components together.

The centre board case was glued and clamped in position on the already completed port keel side, with the rear keel blocking and the nose block already glued in place.

The port keel side is underneath the centre board case.

Then the two halves of the starboard keel side were glued and clamped in place on top of the rear keel blocking, the centre board case, and the nose block.

This is when it all got a bit fraught.

I was still relying on the dispenser pumps to measure out the correct mix of resin and activator, and working at speed I was not confident that I was getting it right. I wasted a fair amount of resin because I did not trust it.

On top of that the components refused to slot neatly into place, as they had in the dry assembly. Now they were covered in thickened epoxy glue and they slid around under pressure from the clamps. Eventually I wrestled everything into place, using all the clamps that I possessed at the time to hold it together.

The clamps now fouled the centreline string which had to be removed, so I lost my visual confirmation that the final assembly was still true.

My lovely wife came to visit for a chat half way through this, and was politely told "Not now, darling".

This what it looked like all glued and clamped together. 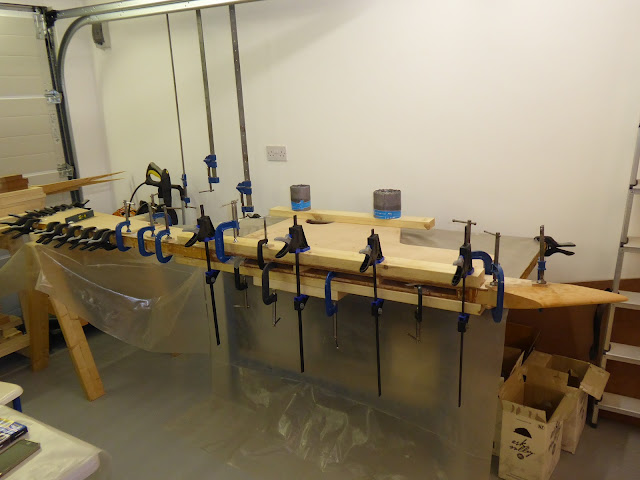 Note the heavy rolls of lead holding the centre board case down on the bench to counteract the weight of all the clamps, as the keel had to hang over the edge of the bench during assembly to accommodate the clamps. The aft end of the keel is supported on a saw horse.

Also note the blocks inserted in the centre board case slot in way of the clamps to stop the slot collapsing under pressure.

I drew a few conclusions form this experience:

Here is the assembly with clamps removed after it had cured. 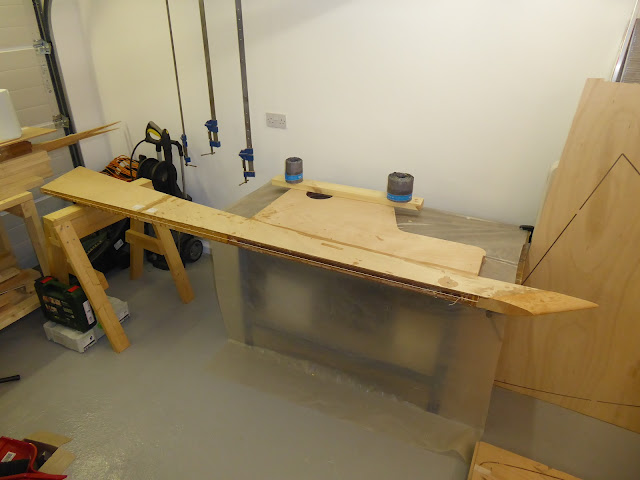 And here is the stretched string back in place, exactly over the keel centreline. Phew. 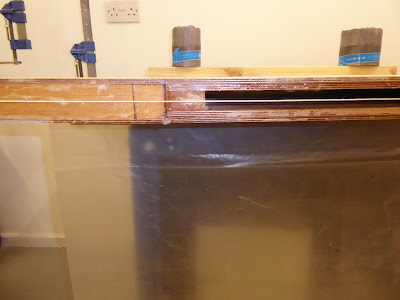 I found that the keel sides were not exactly aligned. One side was a couple of millimetres higher than the other towards the front. Thinking about it I could not see that this was material. Such a tiny error would be cancelled out during the hull build with the addition of epoxy fillets, 'glass and resin. So I stopped fretting about it. It's a boat, not a piano. 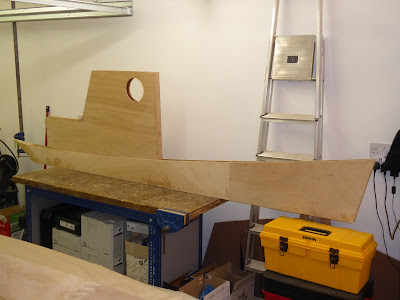 This is the fully cured assembly.

The next step called for by the manual is the pour of molten lead into the keel (and the centre board aperture) for ballast, and the addition of the keelson to complete the keel assembly. The keel would then be placed in the build cradle ready for the lower hull build.

If I did that next the workshop would become pretty much full and I would not have room to make the big hull panels. So I set the keel aside and moved on to manufacture the panels.