Floorboard Problem | Holes In The Hull!

Months ago while working underneath the boat I discovered a slight problem. The screws that hold the outermost floorboards in place were protruding through the hull.

Here is one of them. 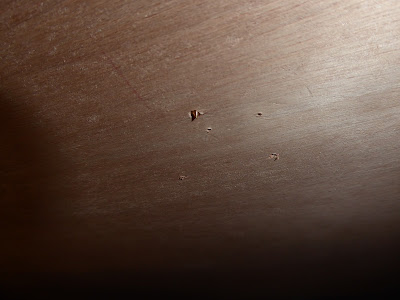 When fitting the floorboards I found that 1 1/2" 8 gauge screws were too long for the outermost floorboards - there simply isn't enough depth in the floors at that point. So I used 1 1/4" screws instead, hoping that would work. Clearly it didn't.

Holes in the hull are really not a good idea, so I devised a plan to fix the problem. I would remove the screws from the outermost floorboards, drill and plug the holes in the hull, and attach the boards to their inboard neighbours with a couple of dowels.

When I had some spare time I removed the protective layers from the floorboards. I had forgotten how lovely they are! Especially when seen through a porthole, like this. 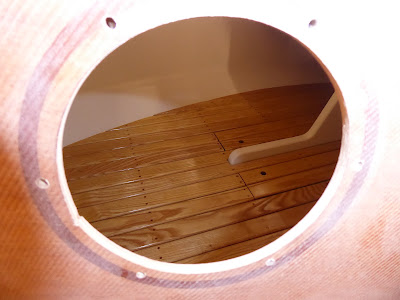 I unscrewed the seventh and eighth outermost floorboards on both sides of the boat. Here they are on the bench. 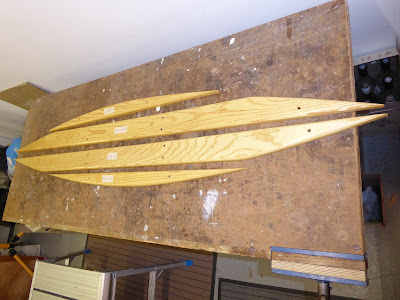 I drilled a 6mm hole where the screws had gone through the hull and plugged the holes with 6mm Sapele plugs, epoxied in place. The plugs were trimmed flush and the floors sanded and repainted.

When fitting them I numbered the 8 floorboards on each side from the centreboard case out to the hull, port (P) and starboard (S). Thus P1 to P8, and S1 to S8.

To join the floorboards the first step was to drill two holes for an 8mm dowel in P8. Here it is, being drilled. 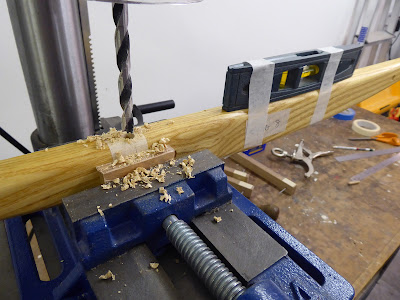 The floorboard is clamped in the drill vice, with a spirit level taped in place to make sure it is horizontally level.

The next step was to drill corresponding holes in P7.

It was important to make the holes in exactly the right place. Years ago I made kitchen furniture using dowel joints, and I remembered that I had a tool set for this very purpose.

The technique is to use a metal plug (6 or 8mm) with a raised spike in its centre. You insert the plug in the first hole and line the board up with its neighbour and apply some pressure. The spike makes a little hole in the second board, showing you exactly where to drill.

This is the marking plug, in place in P8. 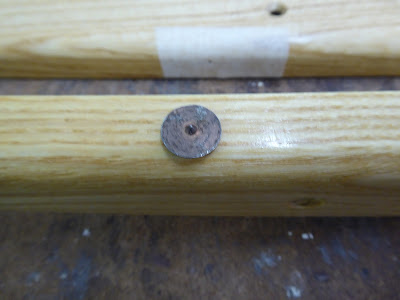 And here is the resulting mark for the centre of the hole in P7. 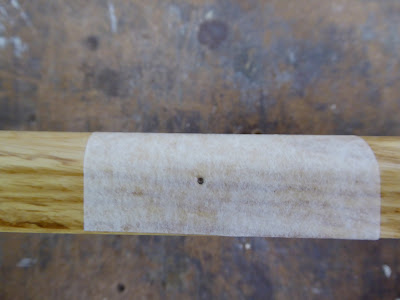 P7 was then drilled for the two dowels in the same way. Like this. 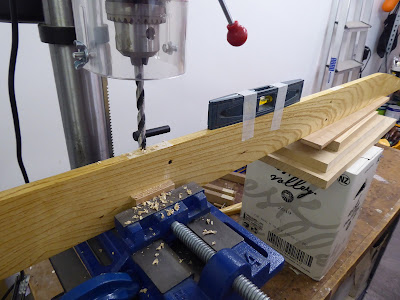 Here are the two floorboards joined with hardwood dowels and a dab of epoxy glue. 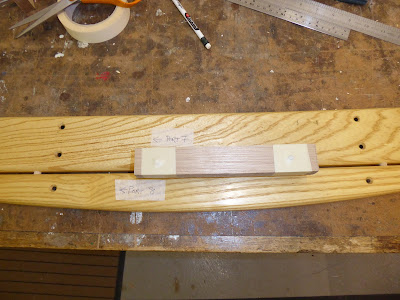 I used the spacing gauge I made when fitting the floorboards to make sure P7 and P8 were 1/8" apart. It's just a couple of nails in a piece of scrap timber.

The same process was then followed to join the two starboard floorboards, S7 and S8. 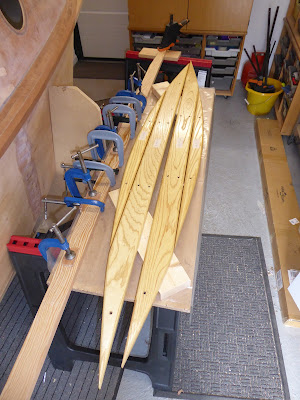 The dowels were coated with Danish oil, as used on the floorboards.
I cut the heads off four bronze screws and fixed them in the countersunk holes in P8 and S8 with a dab of caulk, and refitted the floorboards with the screws in P7 and S7.