With the easy-to-fit full length floorboards in place I now faced the challenge of making the shorter boards with curved ends, and in the case of the outermost boards entirely curved sides.

I must say that in common with some other builders I felt somewhat abandoned by the build manual at this point. It devotes just three pages and five photographs to what is actually a really big project. You can tell that the writer of the manual was not the builder of the boat!

My first question was how to shape the edges of the floorboards where they meet the sides of the hull. Should the edges be perpendicular to the top of the boards, with vertical edges, or should they be chamfered to lie flat against the hull sides? The manual offers no clues, and I could find examples of both approaches in builders' blogs.

However, common sense prevailed when I realised that a chamfered edge would require the planks to be longer and wider than they are designed to be. So that was easily answered.

My next question was how do I mark up the curved ends and edges on the floorboards? It was easy to see how the final fairing would be done, using a batten on the fitted boards, but how do I cut the boards to shape without removing too much or too little waste for them to fit?

I tried making a pattern but that didn't work. Then I tried spiling from the side of the hull onto stock, but all that did was mark in the curve that would be required if the boards were chamfered.

In the end I figured it out from other builder blogs. 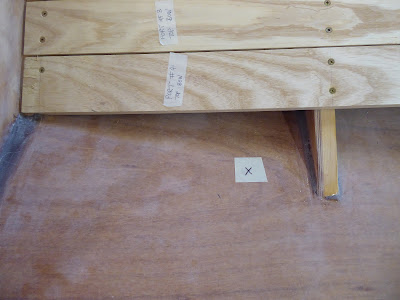 Mark this on the floorboard, then draw a straight line to a point at the end of the board which removes enough stock to allow the board to be fitted but leaves enough for the final curve to be faired in. Like this. 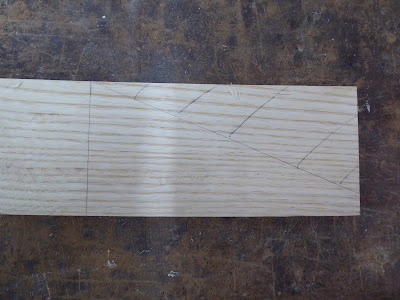 Here is P5 fitted in place. You can see the gauge being used to mark the position of pilot screw holes on floor 4, and the spacers to hold the planks 1/8" apart. I held the boards lightly in place with bar clamps, just to stop them from moving while I was marking up. 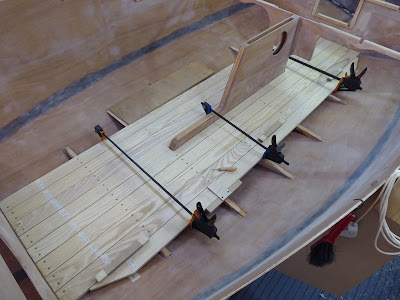 Not all the floorboards had perfectly straight sides, unsurprisingly, so needed a bit of trimming to make them sit neatly alongside each other.

Here P5 is being trimmed with a big Lie Nielsen panel plane which I bought ages ago for just such a job. The jack plane isn't long enough to do this. 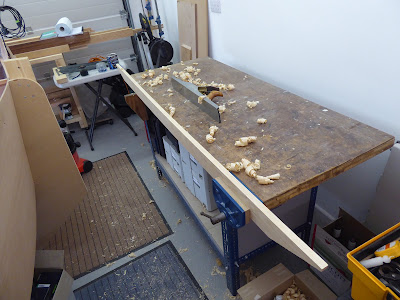 You don't need a plane like this very often, but when you do it really is the only way of getting a true straight edge.

So that's how I fitted the curved floorboards ready for final fairing. It's a bit hit and miss and is not very scientific, but it works.

Here are all the floorboards fitted, looking aft. 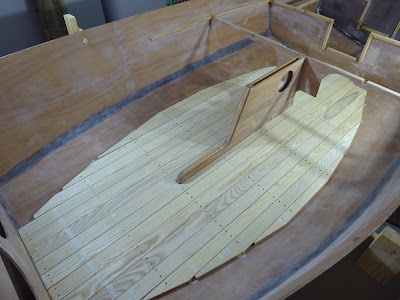 You can see in the picture below that the curve will flow between the points where each side of the board meets it's neighbour. The trick is to leave enough waste in place to scribe in the curve. 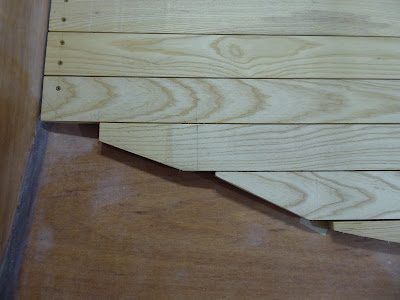 The next step is to fair in the outline of the floorboards.