Flush with success and confidence from making the starboard fillet I set to work on the other side the following day.

It did not go well.

On the first fillet I shaped it roughly as I went, but on this side I decided to apply the fillet mixture in one pass and shape it afterwards.

Working from stern to bow, by the time I got to the nose of the keel the resin in the rear half of the fillet was already curing and was too hard to shape.

So I applied Peel Ply to the front half and shaped it with a roller before that started to go off too.

I was now confronted with a sorry sight, as here. 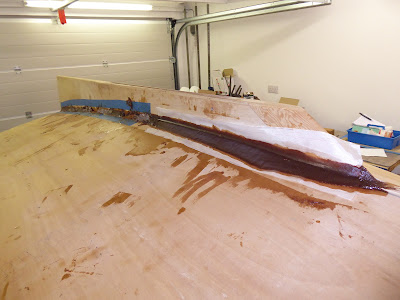 There was nothing more to be done so I removed the blue tape and hacked away as much of the hardening epoxy as I could and left the whole thing to cure.

It was disappointing but entirely my mistake, and I knew I could reshape and finish the rest of the fillet just as I had done many times before.