I left the glued-up rudder to cure for a couple of days before removing the clamps and examining my handiwork.

I was immediately concerned at what I saw.

In short, the rudder blade was curved on one side, and straight on the other.

In other words, it was bent.

Here it is held upright in the vice, for appraisal. 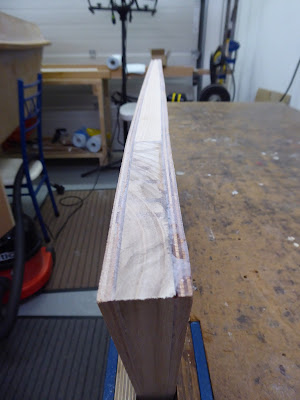 For a split second I thought that perhaps it would not make much, if any, difference to the performance of the boat.

Then for another split second I thought that maybe it would not even be noticeable.

Then reality kicked in and I knew that I would have to remake it. It's not right and there is no way that this can be part of my boat. There is no doubt that this qualifies as a fully fledged Cock Up.

So I didn't do anything. I let it be while I considered how to correct the situation.

On reflection, I was foolish to simply glue the sides and the blocking together, and assume that they would acquire the required aerofoil profile all by themselves. Why would they?

I even made it worse by using wires to stop the blocking from sliding around.

When making the keel I had previously had a similar moment.

To make sure that the keel was straight I marked in the centre line and used a line strung between the front and rear of the keel to make sure it was exactly aligned.

That is what I should have done with the rudder.

So, more work required on the rudder ...