While the fibreglass cloth and tape were curing I retrieved the stock for the carlins and sheerclamps from the woodrack and made a plan of attack. The carlins would be easy but the sheerclamps would require a fair bit of bending into place, which made me slightly nervous.

The first task was to put a rounded edge on the parts.

I used my router and a 3/8" bearing-guided round-over cutter. I thought about setting up the router table but decided it was a lot of effort for quite a quick job. So I clamped the pieces to a temporary bench set up outside, and ran the router along the workpieces.

Here I am rounding over both bottom edges of the carlins. 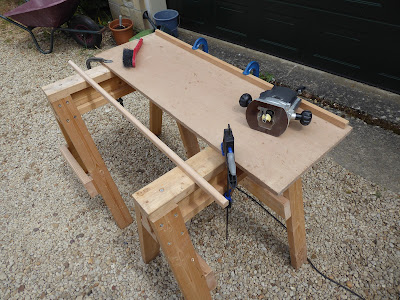 And here I am rounding over the bottom edge of the sheerclamps, visible in the cabin and the forward deck. 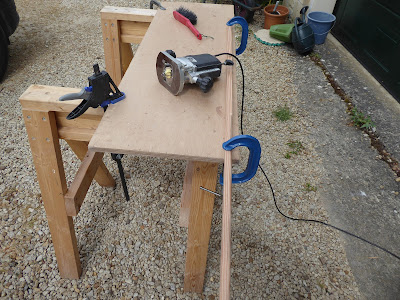 When I checked the manual I noted that it says to use a 1/4" round-over. I don't know why, because all the other round-overs on stringers and frames in the hull are 3/8". So I'm happy with that. They all match.
A check with a piece of scrap cleat material showed that the slots in bulkhead 2 were too tight for the sheerclamps, as predicted by the build manual. They were partially blocked with fillet material. So, I cleaned them out with a small Saburr carbide burr in the Dremel and a couple of sharp files. Here are the tools. 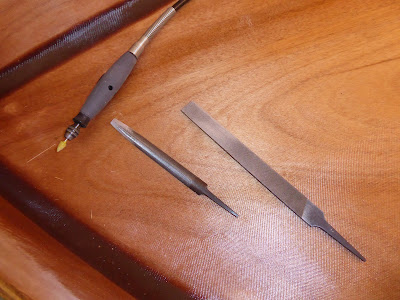 And here is the slot in the starboard side of bulkhead 2, after clean up. 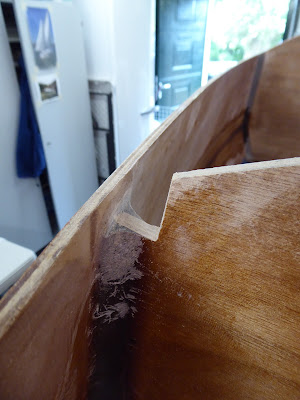 There is now plenty of room for the sheerclamp to be inserted.
Now for the carlins. First I marked out the correct angle on the carlins where they sit against the rear cabin wall, using a bevel. Like this. 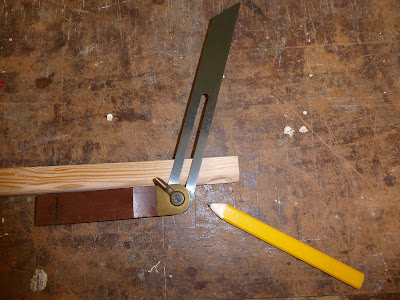 I then cut and test fitted the carlins by holding them in place with a small, temporary screw. Just to make sure that everything fitted properly. As here. 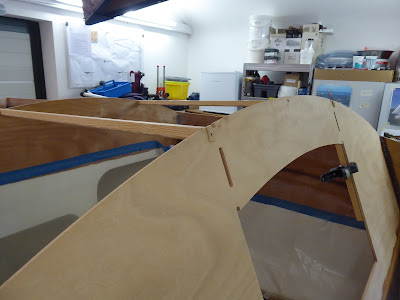 I then shaped the rear end of the port sheerclamp so that it would sit snugly against the rear wall of the cabin.
First I marked out and cut the angled face, making sure the sheerclamp was the right way up!
Then I marked out and shaped the curve on the end of the sheerclamp to sit up against the fillet. I used my Shinto saw rasp - it's ideal for this sort of thing. I used a filleting tool to mark out the curve.
That went well.
Then I carefully measured the length of the sheerclamp inside the hull, and measured the angle for the bevel at the bow. And cut it.
Here is the port sheerclamp  clamped in place, for its dry fit. 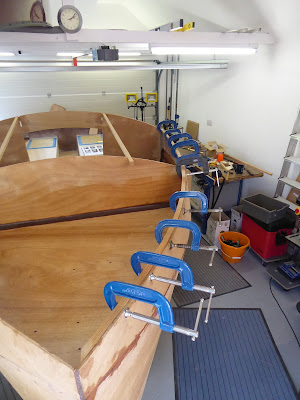 The observant reader will immediately notice that the bevel is perfect, but the sheerclamp is 1/2" too short … so much for careful measurement! No matter. A small piece of the offcut will fill that gap later.
I then followed the same process when making and fitting the starboard sheerclamp, except this time I cut it to the correct length. Here it is. 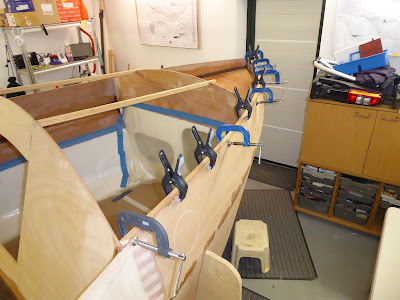 So far so good.
But there was some drama along the way.
Part way through fitting the port sheerclamp there was a loud bang, and a puff of dust at the bow. I thought the stock had snapped, but all seemed well so I put it out of my mind and carried on.
However, while fitting the starboard sheerclamp it became obvious what had happened.
I hadn't bothered to put a proper fillet between the topsides panels where they meet at the bow, reasoning that they will be cut away later when the bowsprit is installed and they don't need a permanent joint.
Instead I filled the outside of the join only, with a sort of tack weld. Except I didn't use fresh epoxy - I used some partly cured squeeze-out from some fillets.
Big mistake. This is what happened when that join was strained by the sheerclamps. 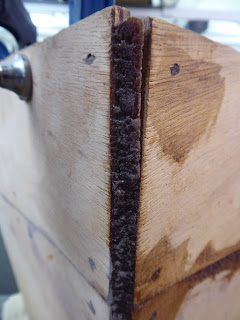 You can see that it didn't hold - there's a crack in the joint with the top half of the port topside panel. The bottom half of the joint is fine, where it is held together by a strong fillet inside the hull.
It doesn't matter - I will put an extra-strong wire stitch in there to hold it while gluing in the sheerclamps, and I will refresh the external epoxy joint before moving on.
But … Note To Self: Do not re-use squeezed-out epoxy! It has started to go off and it does not penetrate into or bond surfaces! It will fail under load!
OK. Lesson learned and no real harm done.
And lastly, I finally decided that the temporary screws holding the carlins in place were a waste of time and replaced them with bronze wood screws, as decreed by the build manual.
Here is one in place. 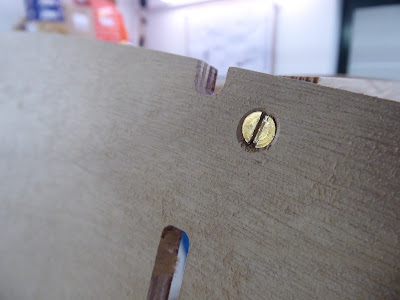 Now, any woodworker will tell you that it is heresy to drive a screw into end grain, which is exactly what we are doing here. It will not hold under load, having nothing to grip into.
But in this instance the carlins will be fastened with epoxy and once it's cured the screws will be largely irrelevant, so I guess it's OK. Once again I remind myself that we are building a boat - not a piano.
So one 1 1/2" 8 gauge silicone bronze countersunk wood screw now holds each carlin firmly in place.
My final task in this episode was to sand the forward deck and topsides to a smooth, matt finish with the edges of the fibreglass cloth feathered out and invisible. Here is what it looks like now, sanded to a P80 finish. 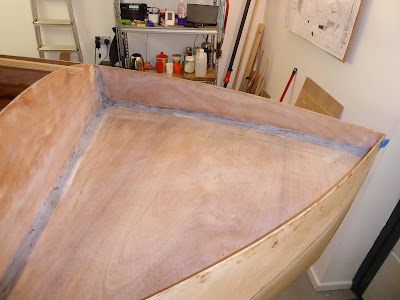 Next we will permanently install the sheerclamps, and after that we will add further layers of fibreglass cloth to the forward deck. It has to be really strong.
Onwards and upwards!
at June 12, 2020